Birria Tacos are juicy, cheesy, crispy, and incredibly popular! Birria de res stew is slow cooked with spices and chiles, shredded and put into corn tortillas with cilantro, onion, and Oaxaca cheese, and fried in a pan until crispy, melty, and absolutely delicious. Don't forget the consomme, it's bursting with rich, savory flavor."

Y'all if you're a beef stew fan like me, you probably had your mind blown when you found out that this Tik Tok craze is actually a traditional Mexican beef stew that is put into tacos!

Honeyyyyyyy, let me tell you! We are a house full of foodies, and while we've had birria before we've never thought to put it into taco form! This was just a God-send and I knew I needed to get my hands into it.

We've made plenty of Latin food (my husband is Dominican, I'm part Panamanian, and I grew up in Miami so hispanic food is completely in my wheelhouse) but these birria quesatacos are something made of magic, y'all. No wonder they've taken the U.S. by storm.

Birria (pronounced beer-ria, with the rolling 'r') is a dish from the Mexican state of Jalisco. Traditionally, it's a savory stew made with goat meat or even mutton, slow cooked with herbs and spices for hours until the meat is fall apart tender. Nowadays birria de res, or birria made with beef, is the most mainstream way to make it. I love using chuck roast and short ribs, because the consomme needs that delicious beefy sticky-lipped sensation that you can only get from bone-in beef.

Birria is made for celebrations, birthdays, graduations, but because it's become so popular it's now a fantastic weekend dinner dish that you can make at home.

Birria tacos are simply tacos that are filled with birria meat and other toppings like stringy Oaxacan cheese, onion, and cilantro. The corn tortillas are dipped in the fat that sits on top of the broth the meat was braised in, then pan fried until crispy. The tacos are then dipped in the broth, called consomme, and devoured because they are just so good.

Some say it came from shepherds and the dish slowly slipped into homes and restaurants, others say it came from indigenous Mexicans who were trying to get rid of the overly-populous-goat-pest problem they had after the Spanish colonizers brought the animals with them. Either way, a delicious stew (and one day, taco) was born.

As for the origins of the name birria, it's also a controversy.

The term 'birrioso' is the adjective of birria, and it means 'low class' or 'worth nothing'. Many people don't like the derogatory connotation, and have come up with different ideas including that the origin of the name comes from 'berrear' which is the Spanish onomatopoeia for a goat's bleating.

But in modern times, people use the gastronomic term for birria: “a meal of exquisite flavor, tradition, and culture.” I like this definition the most...the second favorite is the goat bleat, I mean come on! Who doesn't like that?

How to Make Birria de Res

I love the birria stew itself, and it's not too hard to make! It only has a few steps:

This may seem intimidating, but I promise it's easy.

The tortillas are lightly dipped in the fat that sits on top of our birria stew then fried with the shredded beef, some Oaxacan cheese (mozzarella works great too since Oaxacan cheese is a string cheese), cilantro, and onion.

After that, it's served up with the consomme, which is the broth the beef was braised in. I like adding extra cilantro and onion in there, but it's optional. The consomme is honestly one of the best parts of birra quesatacos simply because it adds another layer of flavor and texture.

All these ingredients should be easy to find at your local Latin market, especially if you have a Bravo or Sedanos nearby.

Beef Chuck Roast and Short Ribs. If you can find a bone in chuck roast, get it. Chuck yields a really great amount of meat but we want the bone. Which is why I also add in short ribs, they have excellent flavor, great marbling, and of course, have the bones to help make the broth. You could substitute the short ribs for oxtail, which I absolutely love for their amount of collagen but hate their price tag.

Dried Chiles. It's not birria without these chiles, y'all. They don't make it super spicy or anything, they give just a little kick so it's still family friendly, but they pack a lot of flavor. Remember to cut them open and remove the seeds before preparing them, those seeds are really spicy!

You'll need guajillo peppers, which are mild heat chiles (between 2,500 and 5,000 on the Scoville Scale) that are sweet, smoky, tangy and fruity in flavor.

The next chili is chipotle pepper in adobo sauce. It's just a tad bit more spicy than the ancho, but I love that familiar smoky flavor. Did you know a chipotle pepper is just a smoked, ripened, dried jalapeño? They keep heckin' bamboozlin' me, I need these chiles to get their stuff together.

Anyway, get the chipotle in the adobo sauce. Comes in a little can with about four or five peppers in it.

Okay, after the chiles comes the herbs and spices.

First up, Mexican Oregano! I like the fresh stuff (found at Bravo and Sedanos *i.e. hispanic grocery stores* in the refrigerated section!) but you can find dried Mexican oregano on Amazon or in the Hispanic aisle at the local box box grocery store.

A whole head of garlic. Because garlic is life. Just use the whole cloves, they're getting blended up.

Smoked paprika. It's so good, another smoky element with a lot of flavor.

Coriander seeds, cumin seeds, whole cloves, and a cinnamon stick. We're toasting these in a dry pan before simmering in the sauce. This helps release so much of their flavor and gives them even more depth. Sure you can just dump them in, but the extra step is quick and easy!

Oh, and remember to grab that cinnamon stick before blending the sauce. It won't blend up well and you'll have shards of cinnamon in your consomme.

Tomatoes. If you've got some fresh tomatoes from the garden, go ahead and use them! But I love canned pureed fire roasted tomatoes for this.

Beef Broth. This makes the sauce looser and gives more liquid for braising. Always use stock instead of water when you can for added flavor.

Apple Cider Vinegar. Brightens it up with some tanginess. You could also use regular white vinegar or white wine vinegar.

Tortillas. Use corn tortillas for birria tacos, when they're dipped in the fat and fried, they're just *chef's kiss*. I've got a homemade corn tortilla recipe right here!

Cilantro. I know, I know. Some people have that whole cilantro-soap gene. This tip is for y'all: just use flat leaf parsley, honey. Parsley has a milder taste of what cilantro actually tastes like, without the soap.

Tips for the best Birria Tacos

To pin this recipe and save it for later you can use the Pin button on the recipe card, the sharing buttons above or below this post, or on any of the photos above.

Tag me @sweet_tea_thyme on Instagram when you make this recipe, and don't forget to leave a star rating and comment on the recipe card. I love seeing my recipes enjoyed and shared in kitchens across the world; you guys are amazing!

*English cut short ribs are the typical 'short rib' cut, where the ribs are chopped into 4 inch long pieces. We're not looking for 'flanken style' as they don't have a lot of bone. Flanken style is mostly seen in Korean bulgogi recipes!

Not everyone has a high powered blender, so if you have one that makes the consomme sauce chunky no matter what, just strain all it again through a mesh sieve so you can keep out any chile skins, uncrushed spices, and whatever else your blender didn't blend up.

You can use bone in chuck roast, extra beef bones from your butcher (we really want those bones for the collagen!), or oxtails instead of short ribs.

Don't Have Oaxacan Cheese? Use this!

Mozzarella is a perfect replacement if you can't find Oaxacan cheese. OR any stringy cheese will do!

All nutrition facts are estimations. Please see a physician for any health-related inquiries.

Did you make this recipe?

I love seeing you make my recipes and hearing how they went for you! Leave a comment and a star rating in the recipe card and be sure to tag any photos with #SWEETTEAANDTHYME

Eden Westbrook is the recipe developer, writer, and photographer behind Sweet Tea and Thyme. A classically trained chef, Eden has inspired home cooks into the kitchen with cultural comfort foods, easy family-friendly eats and sweets, and glorious spreads for date night and entertaining since 2015. 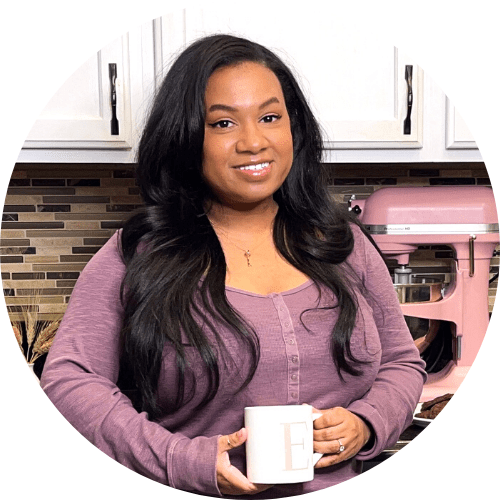 Hello, there! I'm Eden. I'm a food photographer, a mom and wife, and a classically trained recipe developer.
Find more about me